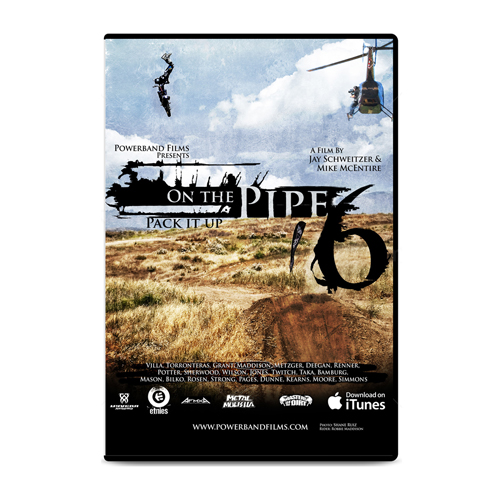 Continuing with our tradition we will release On the Pipe 6 in October 2010. We've already began production on OTP6 starting out with Bilko and Potter flipping some huge gigantic natural terrain hills.

On the Pipe 5: Still Alive 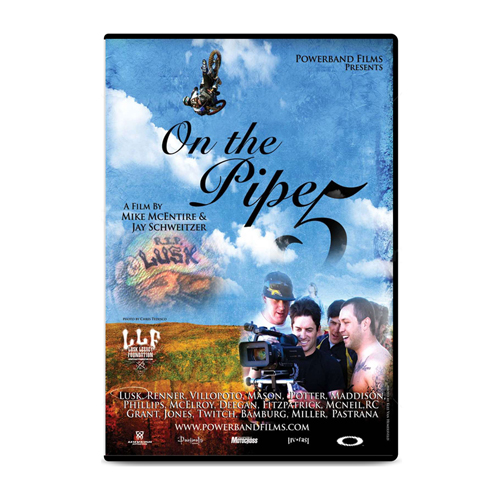 Powerband Films is Proud to Release “On The Pipe 5”. Shot entirely in HD with the best riders in the world, OTP5 unleashes a cinematic showcase of freestyle, race and freeride motocross action. Join Josh Grant in the So-Cal Dunes as he crushes the biggest 4th gear double of the year. Come with us to the barren wastelands of Nevada to check out the new Livefast Compound with an all star Reno Crew. Travel to England to witness Ryan Villopoto help Team USA secure another MX of Nations Title. OTP5 is dedicated to our fallen hero and friend Jeremy Lusk. Jeremy conquers his favorite riding sports and provides an in depth look into his MMA training regiment and how it lead to his becoming the number one FMX Rider in the World. OTP5 has it all from private track sessions with Bubba Stewart and Ricky Carmichael, to spectacular helicopter shoots in Canada and Arizona. Powerband Films captures the highest level of the sport and once again proves why the “On The Pipe” series has become a classic in the motocross world.

On the Pipe 4: Another Score 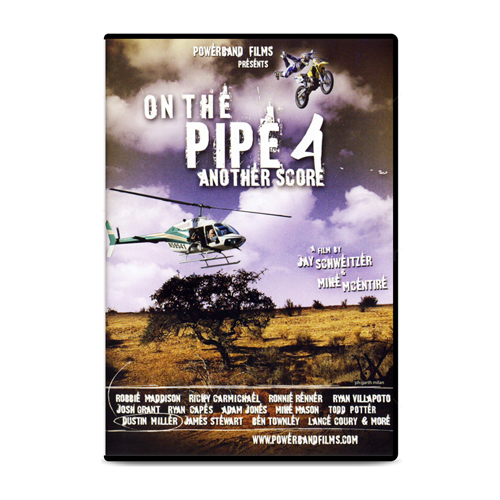 Just when you thought all the sick riding spots were played out, Powerband Films presents, On The Pipe 4: Another Score. Take a trip across the other side of the globe to the best freeride spot in Australia known as the Red Bull Xray event. Created, envisioned and hosted by Robbie Maddison, this event has taken freeriding to the next level as FMX'rs and racers join forces to whip and flip the biggest jumps in OZ. Travel to Sweden with Andre Villa for a look at the Scandanavian FMX scene. Join Ryan Capes as he breaks the world distance trick record in the harshest blizzard conditions in Washington state with a 253 foot heart attack. Riders include: Dustin Miller, Mike Mason, Ricky Carmichael, James Stewart, Ronnie Renner, Travis Pastrana, Ryan Villapoto, Adam Jones, Todd Potter, Ben Townley, Robbie Maddison, Andre Villa, and many, many more.

On the Pipe 3: Another Hit 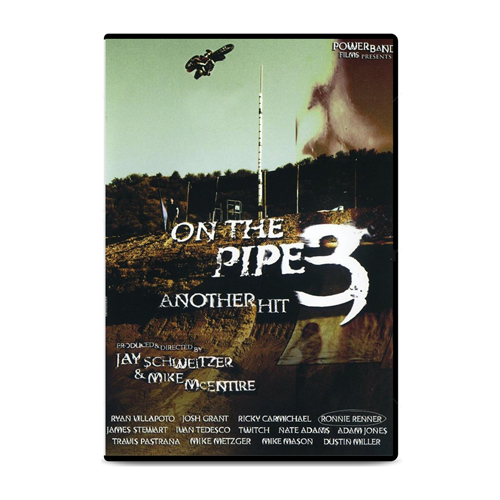 Powerband picks up where we left off and brings you the most technical freeride movie in the world. Once again Ryan Capes attempts to break every record known to man as he attempts to break the ramp to ramp record at the Evel Knievel days in Butte Montana. Follow Trigger Gum to Oklahoma for the worst crash of the year as he attempts to break Ryans distance record. Visit England for the MX Nations race as team USA takes on the world and 10 time world champion Stefan Everts races his last moto. Watch Twitch break the backflip distance world record at 155 feet at Fitzpatricks ranch. Pastrana pulls off a perfect double backflip. Join the top natural terrain specialists in Glamis for the 3rd annual Red Bull Ride to the Hills. Riders include: Ricky Carmichael, Dustin Miller, Mike Mason, Mike Metzger, Ronnie Renner, Jeremy Carter, Josh Grant and many more.

On the Pipe 2: Still Smokin 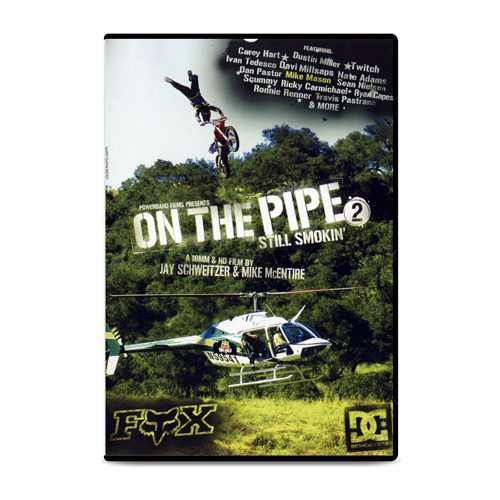 In the ever evolving sport of motocross there is only one company which not only strives to bring you the best cinematic film but also helps to push the sport to the next level. Powerband Films brings you On the Pipe 2 "Still Smokin". This year Powerband has built over 18 new huge freeride jumps for this video specifically. Travel to 4 different outdoor nationals. Watch the best helicopter footage ever seen in any moto film from Jackpot Ranch, Danimals Domain and Sand Hollow Dunes as riders connect multiple 150ft jumps in a row. Visit the 2 time 125 supercross and outdoor champion Ivan Tedesco's in his outdoor training grounds. Score the exclusive pass into Ricky Carmichaels own backyard in Cairo, GA for the DC shoot. Finally end it all with the biggest jump ever in history as Ryan Capes smashes the world distance and height record with a 310 foot air 58 feet high in Seattle, WA. Bands include: NOFX, Pennywise, Turbonegro, Swolen Members, Luna Coil and more. Shot entirely on super 16mm and HD no other video can compare with the content and quality. Get ready for the ride of your life! 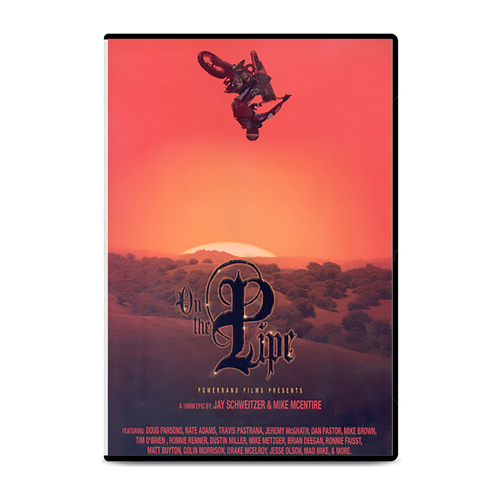 Powerband Films presents On The Pipe 1, from Producer Jay Schweitzer of Crush and the MOTO XXX series in conjunction with Mike McEntire A.K.A Mack Dawg Productions, a new prodigy of film entertainment explodes into moto reality. Watch the heaviest crash of the year as Dan Pastor self destructs over 230 feet to flat and live to talk about it. Head to the Hills for an exclusive look at the first ever natural terrain contest "Ride to the Hills" with 150 foot hill jumps, hips and 160 foot step ups. Go back to where freeriding started in Reche Canyon and ride with Parsons and Twitch of huge step ups and the first ever wall ride. Witness Colin Morrison jump over a 150 foot moving train 5th gear. Travel to Mammoth for the last MX national in the Southern Sierra's. Check out the newest fun boxes and jibs in the biz at Jesse Olson's House. This 16 mm film has it all from racing to the best natural terrain ever caught on film.